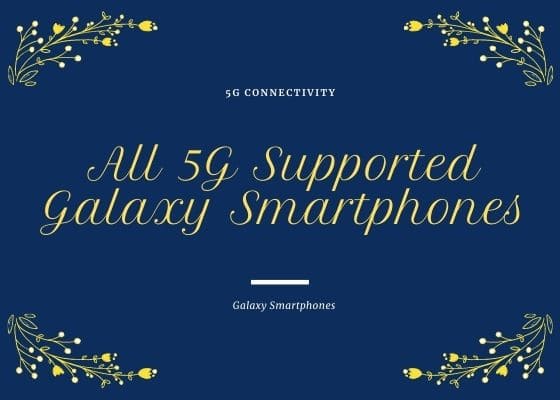 This tutorial will list out all 5G supported Galaxy Smartphones.

Over the years the wireless network connectivity has evolved a lot. It started with analog and now it is in the 5G era. Even though there is no noticeable change in the voice, the data handling speed of these networks has improved beyond imagination. The first mobile phone network which was using the analog technology has 2.4 Kbps data speed, when it was upgraded to the 2G network the speed has increased to 0.1Mbps. Now with 5G, the speed is increased to a whooping 20,480 Mbps.

However before going to the list let me give a brief idea on;

What are the pros of a 5G network?

As already said it’s all about the data speed. While a 4G network has only 3 to 5 Mbps max speeds, the 5G network can give you speeds up to a jaw dropping 20,480 Mbps. Yes you heard it right, a Galaxy Smartphone with 5G connectivity can have data speeds up to 20,480 Mbps.

What are the cons of a 5G network?

Even though a 5G network has amazing data speed it has it’s drawbacks. Main drawback is the coverage. When compared to the previous networks a 5G network can give you maximum speed by compromising the speed. A 5G network is divided into 3 bands Low band, Mid band & High band.

With low band you will get 100 of sq kilometers coverage but at a speed of 30 to 250Mbps. However a high band can provide you 1-3Gbps speeds but at a maximum range of 1.6 sq km radious.

So with 5G, if you want more speed the coverage will be limted to bare minimum.

The Galaxy S series is the most popular and the premium one among all series. No wonder there is 5G support.

The Galaxy Note series is the second best one in Samsung Android Smartphone lineup. It is almost popular to the “S” series which includes tablets, smartphones and phablets. There are few devices which has 5G connectivity as of now.

The Samsung Galaxy M Series is a budget phone from the Koreans. Even though it is in the budget sector it has 5G enabled phones.

The Samsung Galaxy Fold Series as the name indicates is a foldable phone with amazing features. This is the first ever foldable phone from Samsung with dual display.

If you ask me which is the best Samsung Galaxy Smartphone series, when considering the price and performance I will say it’s the “A” series. They are cheaper and very good in performance without any “hanging” and “freezing” problems.

The Samsung Galaxy Tab series is the oldest when it comes to tablets. It consists of both expensive and economic models that suits everyone needs. The list is quite long as it is as old as the “S” series.

The Samsung Galaxy Flip series is a foldable Smartphone.

The Samsung Galaxy F series is the latest from Samsung with a ton load of specs. The first smartphone of the series is F41.

This is the complete list of Galaxy Smartphones with 5G support.

If you have found any discrepancy or missing information, please feel free to post it in the comment section below, don’t worry I will update as soon as possible.

If “All Samsung Galaxy Smartphone Stock ROM/Firmware List” article really helped you, please give a like/share on social networking websites by using the below given buttons.