Advertisement
Home » How To Root Samsung Galaxy Note8 On Android Nougat 7.1.1? (All Models)

How To Root Samsung Galaxy Note8 On Android Nougat 7.1.1? (All Models) 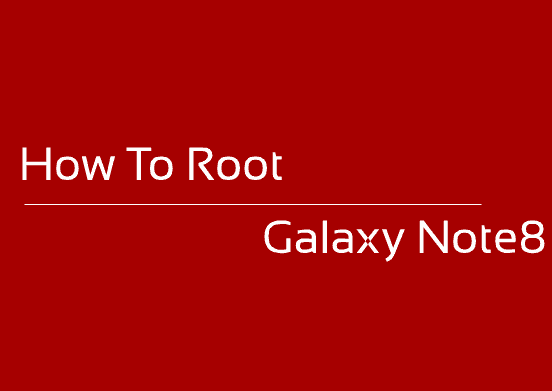 The Note series is always the favourite of Phablet lovers along the globe. No wonder in that though, because Samsung is the first one to introduce a hybrid device like it for those who like to play a little and at the same time do a little office work on their smartphone.

The latest in the series, the Samsung Galaxy Note8 is also very powerful and beautiful like it's predecessors.

But did you ever thought of rooting this monster to unleash it's hidden secrets! If you did, then you have come to the right place because this is the most stable method (CF Autoroot) when compared to the readymade one click apps which are very unreliable in performance and comes with a lot of unwanted "spies".

Please note that you need to take a backup of your complete files on your phone memory, just a precaution for worst case scenario. Also please keep in mind that the rooting will void your warranty. SamsungSFour.com is not liable for any damage caused as a result of this tutorial.

CF Autoroot rooting method have common procedure for all the devices but if you are unfamiliar;

In concise the rooting procedure consists of mainly 5 steps;

It looks like now you have an idea on the rooting procedures. So lets proceed with the rooting steps in the order listed above.

1. First please download the necessary files from the below given links (please report broken download links using the comment option at the end of this tutorial).

2. Once downloaded please extract it to your Computer desktop. You can check the below screenshot to cross check on the extracted contents.

4. Once USB debugging is enabled please enable the OEM unlock. Please check the below tutorial to get an idea on the procedure.

5. Once done please switch of your phone and enter it into "Download mode".

You may also try the below given download mode tutorials for detailed instruction on entering into the download mode.

Once done please instal the Samsung USB drivers for your phone (please google for the drivers) and install it if not done already.

6. Now open the "image" folder (from the earlier downloaded files) and you will see a file named "image.tar.md5" like shown in the screenshot below.

7. Now go back to the main folder and you will see contents like in the below screenshot.

8. Once you are in the main folder please open the "tools" folder and run the "Odin.exe" file from there.

Double click the file to run it and you will get the Odin application opened as shown in the screenshot below. Now connect your phone using the USB data cable to your PC. If the connection was successful you will get an added message in the "Odin" app.

Now click the "AP" button and select the "image.tar.md5" file you found in the "image" folder (mentioned in step no: 6). When done please click the "Start" button in the Odin app to initiate the rooting process.

The odin rooting procedure is all automated so no user intervention is needed once it's started so sit back and relax. When it's finished your Galaxy Note8 will reboot, also you will get a "Pass" message from the Odin app.

If there was any error while rooting, please download a different version of the "Odin" app from some other source and try rooting.

That's it guys, please don't forget to like/share in the social networking sites if this tutorial was helpful.

If you have faced any issues while trying to root your Samsung Galaxy Note8 (All Models) running on Android Nougat 7.1.1, please feel free to post it in the comment section below, don't worry I will help you as fast as I can.

If "How To Root Samsung Galaxy Note8 On Android Nougat 7.1.1? (All Models)" tutorial really helped you, please give a like/share on social networking websites by using the below given buttons.