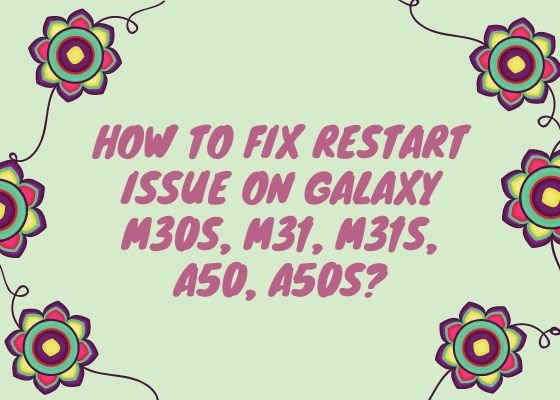 This tutorial will help you to fix/resolve the infamous restart issue on your Samsung Galaxy M30s, Galaxy M31, Galaxy M31s, Galaxy A50, Galaxy A50s or any other Galaxy Smartphone.

The Galaxy “A” & “M” series Smartphones has enabled Samsung to sell millions of phones in the budget and mid range sector over the years. However recently there are some unfortunate issues has started popping up around the globe. Some Galaxy “A” and Galaxy “M” models has started showing a mysterious problem which causes the phone to freeze up and restart automatically.

Preface to the automatic restart problem

The issue has started on the above devices about an year ago, to say from June 2020, and unfortunately it still persists. Most of the users have noticed this issue after a recent firmware update which upgraded their phone from Android 10 to Android 11. On the contrary downgrading the firmware doesn’t solve the issue though.

However if you are going through a simple “bootloop” please try the below tutorial;

After getting feedback from many users it is affirmed that a recent update triggered the restart issue. Even some users has gone to endless bootloop also.

As per the manufacturer the issue is hardware related though and they are asking for a motherboard replacement which costs around $100.

But according to my best assumption the restart issue is triggered when the phone’s CPU is heated up when it is running on higher clock speeds. So when the CPU gets hot the protection mechanism on the phone falsely triggers a restart.

Below are the solutions which are roaming on the internet already;

2. Downgrading the firmware to Android 10

Apart from the above ones there are numerous hacks available on the internet to resolve this issue, but none of them actually worked.

I tried all of them myself on my Samsung Galaxy M30s which is also having the same issue for the last couple of months, but unfortunately none of them worked. I even contacted the authorized service center and they advised me to replace the motherboard, which I definitely will not do.

So I decided to find a solution myself and finally I did.

So lets proceed to the tutorial now.

Before proceeding any further please make sure that you have made a complete backup of your phone to prepare for worst case scenario. Also please be informed that samsungsfour.com will not be liable for any loss of data nor bricking of the device as result of this tutorial.

1. Your phone should be rooted. We cannot proceed any further until your phone is rooted.

Please follow the below links for rooting your phones (all models are not there currently available, however we will update the links soon)

1. First you need to download and install the app Kernel Toolkit from Google Play Store

2. Once installed please open the app and give proper root privileges for it when asked. When you open the app you will get a similar screen like the one given below. 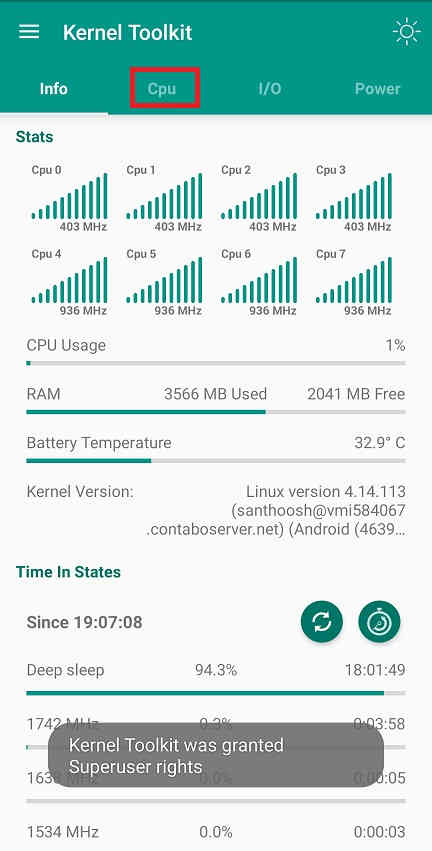 3. Now tap on the tab “Cpu” and you will get the below page.

Here you need to edit the below parameters; 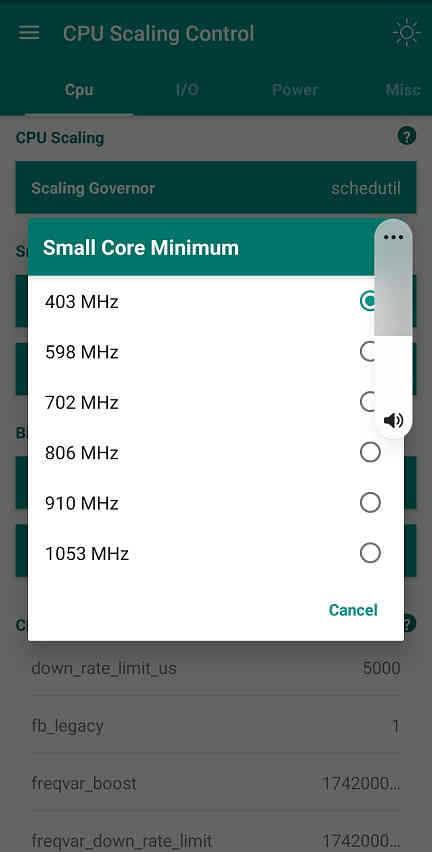 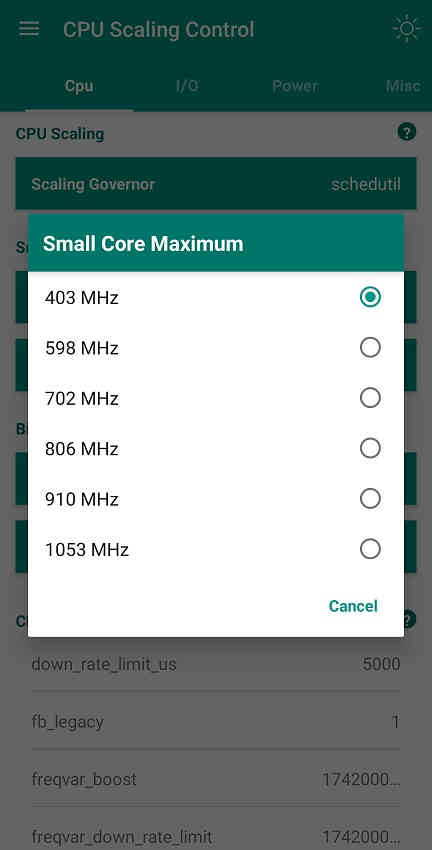 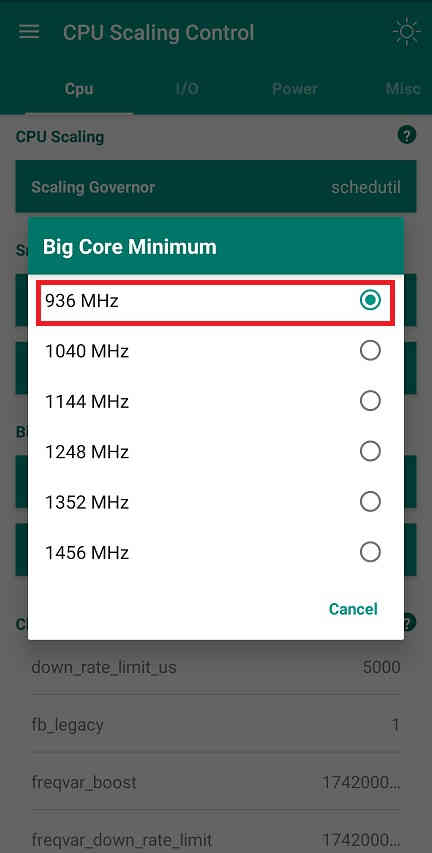 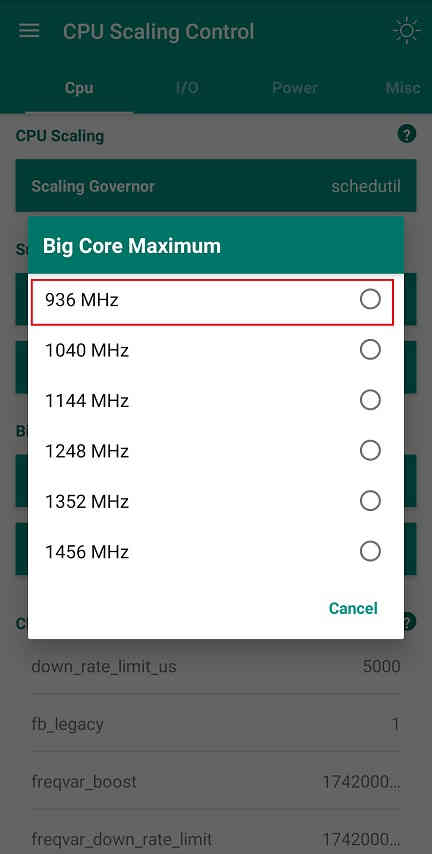 However you may try different clock speeds and check whether your phone is working normally.

Trust me, even though the processor is drastically under clocked, I am not seeing any performance issues for normal operations. However high intensity applications may suffer. But it’s better than throwing the phone away, right?

What is really done here?

What we have done here is, as already said, we have under clocked your Galaxy M30s, Galaxy M31, Galaxy M31s, Galaxy A50 and Galaxy A50s CPU to a lower clock speed so that it never get heated up to the point that the motherboard triggers an automatic shutdown.

Please check the below screenshot which shows the CPU information from the app “CPU Monitor“. It clearly shows that the CPU clock speed is fixed at “403” and “936” MHz respectively. 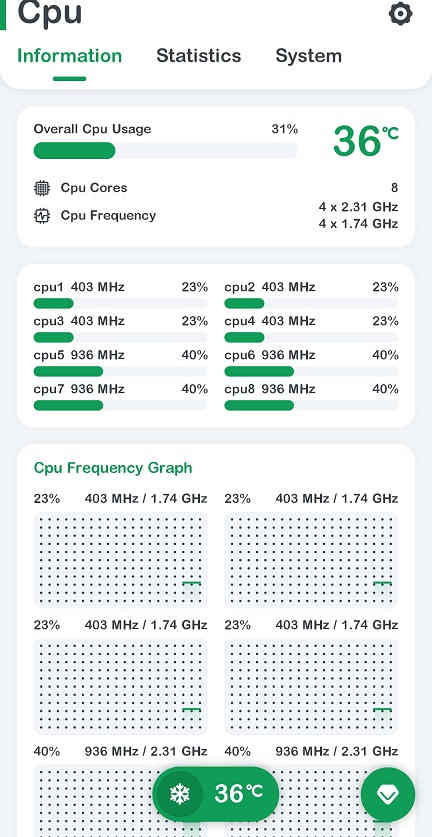 Note: If your phone is restarted or the root is lost some how, you need to do the whole process again.

If you are here you may be looking for;

However if you have faced any issues which needs any support while trying to resolve restart issue on Galaxy M30s, M31, M31s, A50 & A50s, please feel free to post it in the comment section below, don’t worry I will help you as fast as I can.

If “How To Fix Restart Issue On Galaxy M30s, M31, M31s, A50, A50s? (Latest Method)” tutorial really helped you, please give a like/share on social networking websites by using the below given buttons.