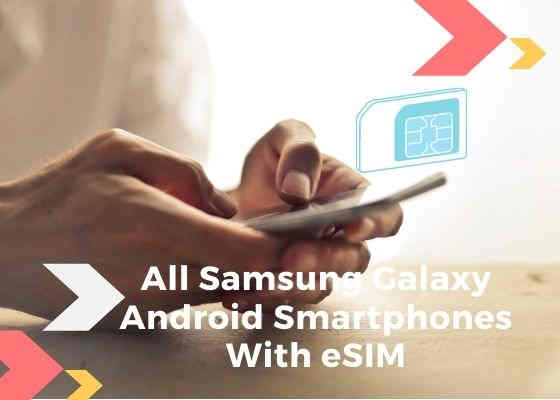 This article will be listing out all the Samsung Galaxy Android Smartphones with eSIM. Now a days you will be hearing a lot about eSIM‘s, the next generation SIM technology for Smartphones which doesn’t involve any SIM at all. Yes, in reality there are no physical SIM cards present in an eSIM.

There are quite a few Samsung Galaxy Android devices which support eSIM’s as of now.

However, we will be updating this list with latest released Galaxy Smartphones with eSIM technology very frequently though.

Table Of Contents hide
1 What is an eSIM on a Galaxy Smartphone?
2 What are the disadvantages of eSIM’s?
3 Normal queries for this tutorial

Before proceeding to the list lets first get an idea on eSIM’s in brief.

What is an eSIM on a Galaxy Smartphone?

To start with “eSIM” stands for embedded SIM cards. As already said eSIM’s doesn’t involve any physical SIM cards. Also you will not be able to change any SIM cards physically just like that. An eSIM is a small embedded chip which comes with your phone from the factory itself just like a Bluetooth or WiFi chip.
The information on an eSIM can be changed any number of times which will enable you to change your operator without changing the SIM physically. With eSIM you can change your network, add a data plan in just minutes. Long wait for network porting is finally over.
This is a major breakthrough for SIM card technology since the day it is released back in 1991. Even though there were size changes to the SIM cards the technology remained the same more or less.
The good news is that eSIM’s are backed by the GSMA also.

What are the disadvantages of eSIM’s?

Also if the phone is bound to a network by eSIM it is impossible you to change the network, for eg: carrier subsidized phones.
One can’t easily switch phones with eSIM but need to contact their network provider for that.

All technology has it’s disadvantages though.

Now lets proceed to the list of Samsung Galaxy Smartphones which support eSIM’s till date.

If any of the above information is found wrong, please feel free to post it in the comment section below so that everybody will benefit from it.

If “All Samsung Galaxy Android Smartphones With eSIM” tutorial really helped you, please give a like/share on social networking websites by using the below given buttons.