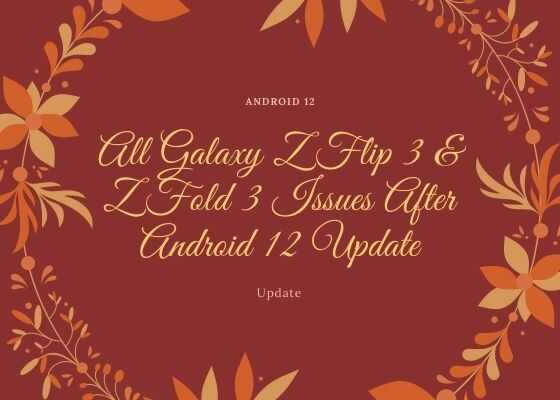 What are the issues/problems/bugs after Android 12 Update On Galaxy Z Flip 3 & Galaxy Z Fold 3?

For some the worst case scenario has happened, it bricked their foldable phones. However for some they noticed screen flickering, sluggish performance, can’t exit recovery mode, Dual Messenger feature not working, dark mode issues etc.
Some users also reported they were not able to take screenshots after Android 12 update on Galaxy Z Flip3 and Z Fold 3. Also for some YouTube and Netflix videos weren’t playing.
For some users camera app was showing strange things like all the captured photos automatically deleted from the gallery. After the update some even noticed bad audio quality audio after 60Hz also.

Is there any solution for Android 12 update bugs?

Unfortunately we don’t have a solution for all the bugs but for the camera app issue only. Deleting the cache and data and optimizing the camera app will resolve the issue for the most.

For that go to Settings->Apps->Camera->Storage

Is there any hope!

Yes indeed as Samsung has stopped the Android 12 roll out and they will relaunch the firmware after the bugs are fixed asap.

If “All Galaxy Z Flip 3 & Z Fold 3 Issues After Android 12 Update” article really helped you, please give a like/share on social networking websites.